The Trebuchet at NF/ Observatory 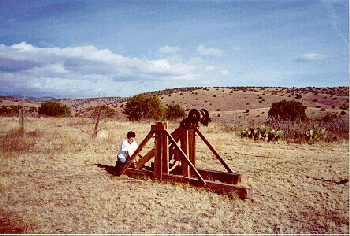 (Page built 1995)
The trebuchet was the dominant siege weapon in Europe from 850AD to 1350AD, lasting 100 years after the introduction of gunpowder. In England it was called an Ingenium, and the technicians which worked on the weapon were Ingeniators (Engineers). Larger versions were able to throw large stones, cows or even shunned negotiators. Rotting flesh was also popular.

The trebuchet operates by harnessing the potential energy of a suspended weight, and demonstrates many physical pricipals. There are multiple variables in the design which can be adjusted to optimize range and throw-weight. This model has achieved a range of 120 feet with a 7 lb. rock, so far.

"Hurling" has become a gentleman's sport in Texas, where a active hurling society exists. Work is being completed on "Thor", a Trebuchet with a 100' throwing arm using a 55,000 lb weight. The design should allow the hurling of '57 Buicks. In earlier days some Texas trebuchets have thrown 'astro-aguanauts'.

More information is available in the July '95, issue of Scientific American. Also check out the trebuchet used in Northern Exposure.