History of the NFO Webscope 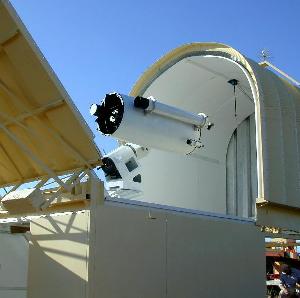 NF/ Observatory is a non-profit scientific organization and is located in Grant County near Silver City, New Mexico [www.nfo.edu] It is at an elevation of more than 6000 feet above sea level in a climate which has more than 200 clear nights per year. In 1987, a 17 inch telescope was designed, built, completely automated, and operated for more than 10 years. It used a CCD camera which was designed and built from component parts including a CCD chip on loan from the Jet Propulsion Laboratory. This telescope made completely unattended observations of supernovae, asteroids, galaxies, and variable stars. Some of these were in conjunction with data being obtained by the Hubble Space Telescope and other ground based observatories. Data were taken automatically and retrieved electronically the day following the observations.

Those years of development provided the expertise and infrastructure for designing, building, and operating robotic telescopes. NF/ Observatory was also involved in a number of scientific and educational projects. We were looking for a 'new instrument'.

In the summer of 2001 astronomers at the University of Arkansas at Little Rock and NF/ Observatory moved a Group 128, 24 inch telescope (24" is the mirror diameter) and a second Group 128 mount from Arkansas to the NF/ Observatory. The telescope mounts were manufactured in the 1970s. Their mechanical tracking and pointing capabilities were not adequate for use with any type of imaging equipment. Fortunately, computer technology had progressed to the point that it was possible to compensate for the mechanical problems using a design incorporating micro-stepping motors, DC torque motors, and digital encoders. A roll-off roof had also been previously designed for a new Observatory "Dome".

Over the next three years a fully automated 24 inch telescope and observatory was constructed and placed into operation. The first electronic image was taken on November 1st, 2004. The new facility gave Arkansas students and faculty members the ability to do their own projects with research quality astronomical imaging data. Over 65,000 images were taken in the first 2 years of operation. Since this observatory is operated under computer control, at an excellent site, it has been able to acquire data for a number of different projects each night. Telescope time has been allocated among the proposed projects by guidelines agreed upon by the associated institutions. The actual objects selected for imaging each night is done by software.

The IDEA Grant Program is designed to promote math and science programs in K-12 schools by integration of NASA space and astronomy programs into the classroom. NFO received an IDEA Grant in 1995 while working on a research project with the Hubble Space Telescope. Another IDEA Grant seemed to be a good fit with Consortium Educational Goals. UALR, and Dr. Grauer, was awarded the Grant in late Spring of 2006, and work was begun on a two year program to develop six integrated exercises. It is a pilot project, and has classrooms in New Mexico, Arizona, and Maryland.